So here’s the thing: I’m a hypocrite. Fuck you! At least I can admit it. You might be thinking, how are you a hypocrite? Shit, where do I begin. I love malt vinegar on my fish and chips, but hate it when you do it because it stinks, if you don’t message me back right away I hate you, but if I don’t message you back, it’s because I’m busy, if you ask for a water with your meal and then don’t drink it, then I do the same thing on my first day off, when you’re in front of me at a red light and it turns green and you don’t go because you’re on your phone, I cuss at you like you killed a family member, then I do the same thing at the next light only I’m pissed at you for honking at me. On a separate note, I found a tortilla behind my bedroom fan this morning, and I don’t know how, or what the fuck that means. 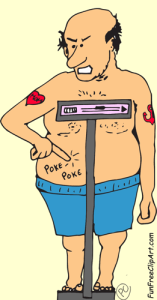 So here’s the thing: I’ve been gone for about a year, and I know that you haven’t been the same without me, probably better, but those times are fucking over! I’m on this diet now, and it’s no secret that I’ve lost weight. The depressing part for me is that I have to listen to people basically tell me what a pig I was before, but now, not so much. I have to live with the fact that now I’m not “so much” of a pig, which only means I’m less gross, that’s not a compliment. Fuck you. That’s you being a dick and not realizing it, and if you’re doing it on purpose, that makes you……..well…..a half dead repeating piece of shit! I have to live my life with a “cheat” day now. That’s a fucking old woman thing and I’m saddened by that, but what can I do? A fucking “cheat” day? How about I cheat on my diet by getting a degree in psychology, driving over to all you handsome and in shape guys house, tying you down, feeding you butter while I show you pictures of a little dick and psychologically convincing you that it’s your’s. On a separate note, I was so stoned the other night that I called my mother and asked her what my middle name was, she said “what?”